In Episode 2 of the BBC’s excellent “Genius of Design” series, (available on Vimeo), there is an interesting section on the Frankfurt Kitchen. Designed by Margarete SchÃ¼tte-Lihotzky, the Frankfurt Kitchen was a response to the need for cost-efficient housing in Germany after WW1. 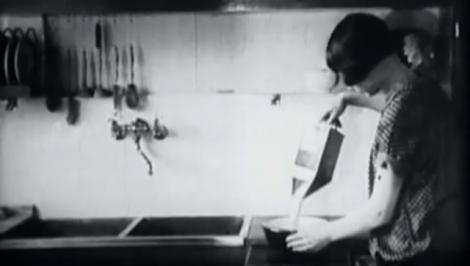 The Frankfurt Kitchen in use (from Genius of Design, Ep.2)

What’s amazing about it is the huge amount of research and exacting attention to detail that went into the design. One of the main driving principles was efficiency, and Lihotzky conducted extensive time-and-motion studies to optimize workflows in the kitchen. She was motivated by the desire to make life easier for people. 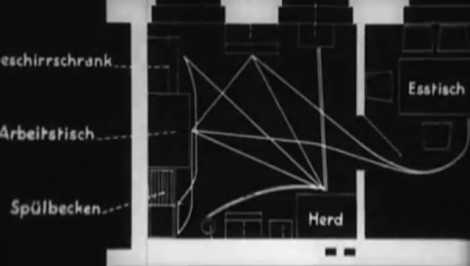 A kitchen-usage time and motion diagram (from Genius of Design, Ep.2)

However, here’s the bit you’re going to love if you’re a UX researcher – in her zeal to make the kitchen efficient, Lihotzky completely forgot to consider real-life context and the social implications of the design. Quoting from Genius of Design Episode 2:

“10,000 of her kitchens were installed in a large-scale social housing development in Frankfurt […] But despite all of the well laid plans, many first time users were apparently baffled by the layout. They found the inflexibility of the design frustrating, and they proved to be disappointingly undisciplined when it came to using the carefully labelled food bins. […] When people actually went in to use the Frankfurt kitchen […] people found them very cold”

Furthermore, the carefully designed food bins (intended for flour, rice, etc.) were easily reached by small children, making spillage very common; labels were pre-printed on the bins, meaning that owners inevitably ended up with all the wrong labels on things; and worst of all, the kitchen was so small that only one person could be in it at a time, making the kitchen user feel socially isolated from the rest of the household. 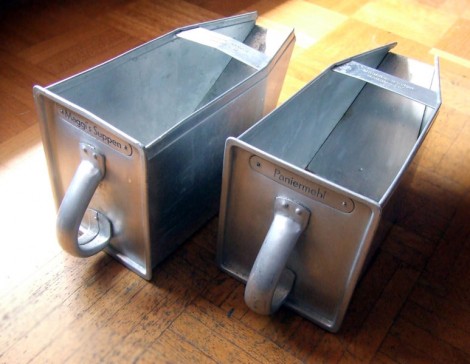 Lihotzky’s ideals were born out of the Tayorism movement – which was all about making factory floor & repetitive labour activities more efficient. In that sort of workplace setting, it is possible to prescribe user behaviour (i.e. “Do this and you get paid”). Where Lihotzky went wrong was that she assumed you could prescribe user behaviour in the home. With hindsight being 20:20, it’s not surprising this idea was doomed to fail.

It’s interesting to consider that an ethnographic study would have uncovered problems with the design very quickly, while dogfooding would most likely have failed to uncover the problems. Why? Because Lihotzky and her colleagues would have been so heavily engrossed in the ideals of the design, they would have used it in a highly disciplined and rigorous way – unlike their target users (german working class families who had just emerged from the ravages of WW1). This is a lesson worth remembering – dogfooding is today a very popular method in big corporates yet it can be disastrous if there’s a big difference between the test users and the real users. Google, for example, used dogfooding in the design of Wave and Buzz, and both of them had adoption issues when launched.

If you’ve seen the off-beat norwegeian Swedish comedy Kitchen Stories, the time-and-motion diagram above might look familiar to you. That’s because Kitchen Stories took a lot of inspiration from Lihotzky’s work, as you can see below. Personally, I love the idea of writing a comedy about field research and time-and-motion studies – it’s such a geeky idea.

A still from the movie Kitchen Stories