If you’re willing to go black hat, it’s easy enough to boost your app’s reviews in the App Store through astroturfing. The downside, however, is not just that it’s unethical – it’s also forbidden by Apple and will probably get you booted out of the App Store. This level of risk is a big turn-off for many would-be black hatters, but what if I told you that there’s a way to manipulate your real users into leaving substantially more positive reviews, and for some reason Apple are turning a blind eye to it?

To get a good understanding of the whole story about manipulating App Store reviews, we need to start by looking back to 2008, when Apple introduced the rate-on-delete dialog. 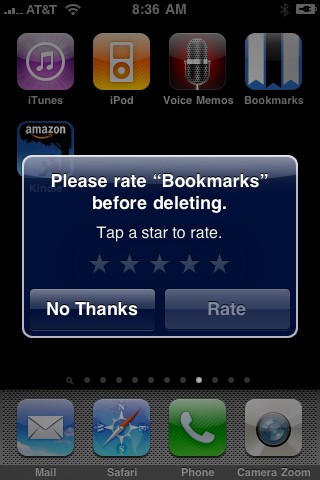 You can see what they were trying to do here. When deleting an app, a user is guaranteed to have had an experience with it – but the fact is people never delete apps when they’re happy with them, so ratings became negatively skewed. Developers were angry and Apple eventually ditched the rate-on-delete dialog. As a case study this tells us a clear lesson. If you can find a subtle way to segment your users by their sentiment towards your app, you can then ask one of those segments to write reviews and not the other, thus skewing the ratings.

Back in 2009 when Apple’s rate-on-delete dialog was still in full force, a guy called Arash Payan created Appirater, a simple class that you can drop into any iPhone app and it simply reminds users to leave reviews after a certain period of time and/or number of uses. 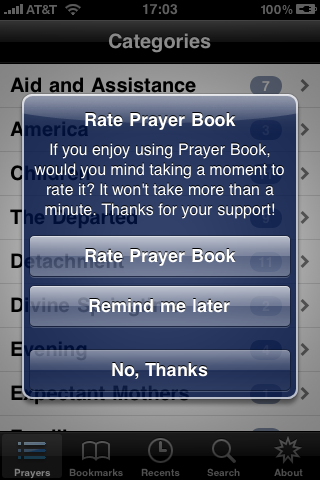 I’d describe Appirater as using an honest, white-hat approach. It asks the user to leave a review without trying to first trying to segment them by sentiment. Now let’s take a look at Occipital’s 360 Panorama app. 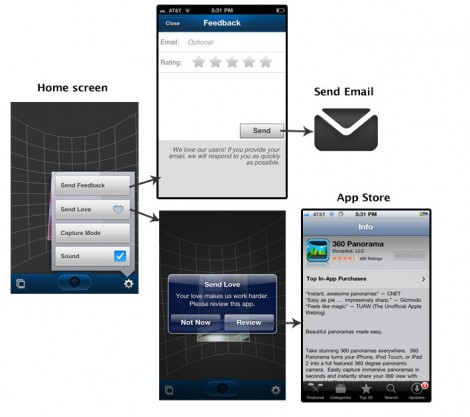 In 360 Panorama, Occipital use some clever microcopy in their settings menu, as shown above. The first option is “Send Feedback” which fires off an email to the developers. The second is “Send Love” which takes the user to the App Store review interface. It really all boils down to that label. The words “Send Love” subtly funnel users with a positive sentiment towards leaving an App Store review. After all, why would someone with a negative sentiment tap that menu item? They’d be far more likely to tap “Send Feedback” and vent through the conveniently private medium of email. All things considered, this interface is a little manipulative – darker grey than Appirater for sure.

Now let’s take a look at Appsfire. In this blog post they proudly announced that they’d “found a great way to improve the rating of your app in the App Store. It’s legal and by the book.” Well, let’s take a look and make our own minds up: 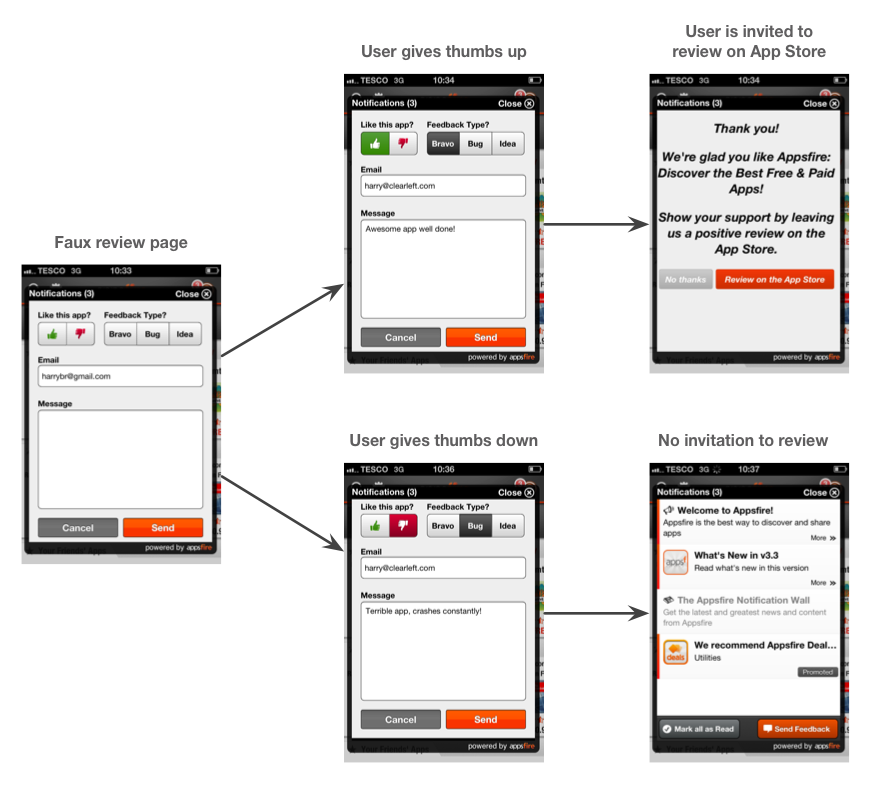 Appsfire’s Appbooster tool has its own non-App Store review UI (far left) which the user can reach through their notifications panel. If the user taps the green thumbs up icon and submits the form, they are invited to leave an App Store review. If they tap the red thumbs down icon, what happens? Nothing. They are given no easy way to post-up their negative review. If they realise their review has not actually been submitted to Apple, and if they’re feeling highly motivated, they could leave the app, open the App Store, enter a search query, find the correct app, scroll down to the bottom of the page, tap on the ratings and then finally they can tap “write a review”. But how many people are going to bother doing that?

Is this a Dark Pattern? It certainly fits the definition. It’s frustrating that Apple rejects apps for the most trivial reasons, but lets this sort of thing through. What do you think?