A skilled black hat copywriter can create a page of content that says one thing when read at-speed (i.e. by normal web users) but says another thing entirely when carefully read word-for-word (e.g. from a legal perspective). Small print and footnotes are a classic examples of this. Black hat copywriting basically involves subverting well known UX copywriting guidelines, so readers are deceived rather than informed:

Now let’s look at an example on Creditexpert.co.uk – a site that allows you to check your credit rating in the UK. The homepage mentions the word “free” all over it: 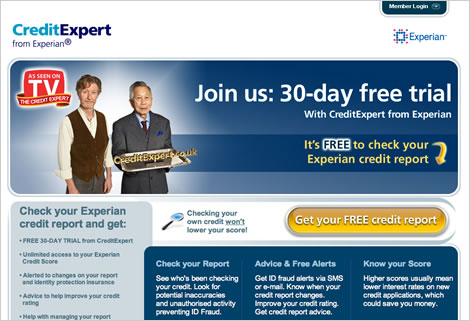 If you click the big orange button, you are taken through a wizard in which the site collects your personal details. Then, you get to a page in which you are asked to enter your credit card details (view screengrab as PDF). It’s fairly likely that when you reach the credit card form, you’ll think to yourself “Huh? I thought this was free, why are they asking for my card details?”. The designers of this page must have expected this, as they headed it off with some explanatory text.

I’m sure you’re familiar with the idea of “honest” inverted pyramid copywriting: you give an accurate summary up-front, then go into progressive layers of detail, so the reader can stop at any time and still have a clear idea of what it’s all about. What we’ve got here is a “black hat” inverted pyramid, which gives a misleading message upfront, then hides the facts lower down. Let’s see it in action here: 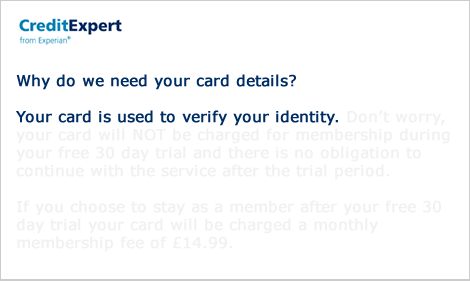 The beginning of the message seems to tell you that your card will not be charged and that it’s just an identity verification thing. If you go on to read a bit more, then you’ll be further reassured: 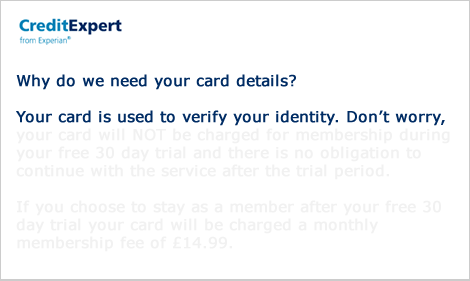 And then if you read a little bit more, you’d be feeling even more reassured:

If you read the whole thing through to the end, you’ll see the real message- that the free trial rolls over into a surprisingly expensive paid plan, which will continue for the rest of your life unless you cancel. 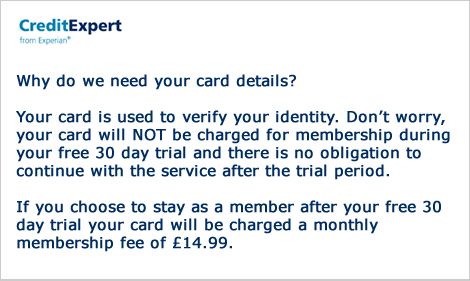 You might argue that this is just grey hat copywriting – and that if it were black hat, they could have taken the final sentence and hidden it in a footnote to bury the key message even further. Maybe so, but their approach is enough to catch a certain number of people out. Just take a look at the Google instant autocomplete suggestions on Google.co.uk if you type the word “creditexpert” followed by a space:

Edit: Malcom Coles has shown that Google Instant suggestions are not a great predictor of scammy-ness. Even so, I’d be wary of simply blaming Google if this happens to you.

To conclude, let’s take a look at some consumer reviews:

“…veering on criminal in their billing methods” – ciao.co.uk

“What a useless ****ing service. Who needs to know their credit rating on a monthly weekly daily basis? May be once in a blue moon any more and you have mental problems.” – complaintsboard.com

“I too fell for the ‘FREE’ credit report for myself & my wife. Having requested credit card details ‘to complete the report’ I then find that they have taken 2 x payments of Â£7.99 from the card without my authority. […] revenue by small print deception.” – reviewcentre.com

“Me and my wife both used Credit expert’s free service only to find a few months later we were being charged Â£6.99 a month for a free service we used once” – reviewcentre.com

“Joined in May 2010 and didn’t realise I’d be charged Â£7.99 per month if I failed to cancel – BECAUSE IT WAS CONCEALED SOMEWHERE OUT OF SIGHT.” – reviewcentre.com

“The expression ‘caveat emptor’ comes to mind. I, too, got ripped off for Â£5.95 for my “free” subscription since I believed Experian to be a reputable organization.” – complaintsboard.com

So what do you think? Are practices like this ever excusable?