When you’re designing a website, the range of things a user can do at any one time is fairly limited – you have quite a clear idea of the paths most users will take and this makes your life relatively easy. Video game designers don’t have this luxury. When they put together NPC AI, physics systems, combinable objects, “go-anywhere” environments and unpredictable user desires, they can’t really be sure how it will all play out until it’s all put together. The whole is much more than the sum of the parts, and a huge amount of tuning is required to ensure a game is as good as it can be. Put this together with the sheer scale of the industry (Grand Theft Auto IV took in over $500 million in sales during its opening week!) – and it’s obvious that gameplay research has a critical role in ensuring success and profitability.

It’s a really interesting space to work in right now, and I’ve arranged a special event on gameplay research for next month’s UX Brighton (8-Sept-09). The line-up includes GiGi Demming (User Testing Manager at Sony Computer Entertainment Europe), Graham McCalister (Director of Vertical Slice), and one or two other mystery guests (tbc). Tickets aren’t yet available, but they will be soon.

In the mean time, here’s a taster of the kind of research that people are doing in this space right now. Most of these images are cribbed (with permission) from a slide deck used in the “Game Metrics and Biometrics” panel at Future play 2009 (Nacke, Ambinder, Canossa, Mandryk, & Stach). 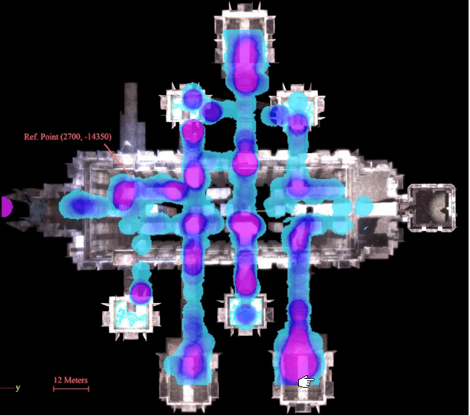 This heatmap is a visualisation of the locations where players tend to die on a level map (Ref: Tychsen & Canossa, 2008; Tychsen, 2008). This gives very useful pointers for how makes it easy to diagnose and fix areas of poor design where the player needs some kind of “boost” to get through. It’s all about balancing – players hate games to be too easy or too hard. 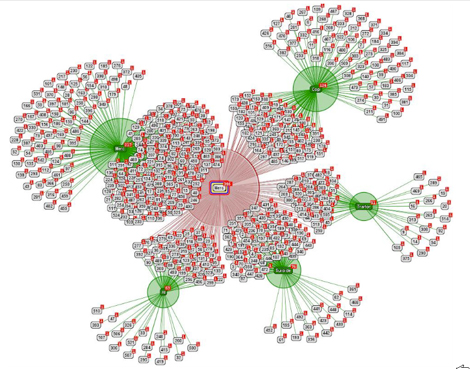 This visualisation from the game ‘Kane & Lynch: Fragile Alliance’ shows player role at time of death against the cause of death. It’s intended to be interactive so a doesn’t make much sense in a static image, but its purpose is allow a researcher to ascertain whether certain roles are weaker or stronger in certain scenarios. (Ref: Tychsen & Canossa, 2008; Tychsen, 2008). 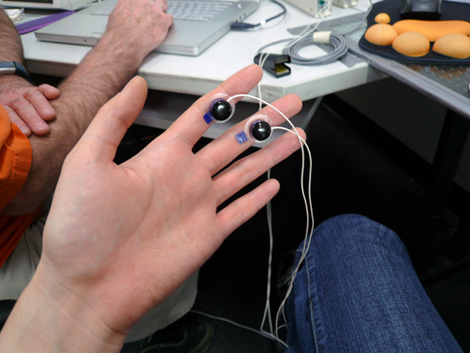 This is a typical Galvanic Skin Response (GSR) device. (Image credit: Shiori Saito). The amount of moisture on a person’s skin is a tacit, non-conscious indicator of their emotional state. This simple device measures the conductivity on a person’s hand. The trouble with GSR is that sweat builds up over time – so for example, it can erroneously show a high level of arousal during a boring cut scene that followed an exciting end-of-level shootout, simply because they player’s hands are still sweaty. 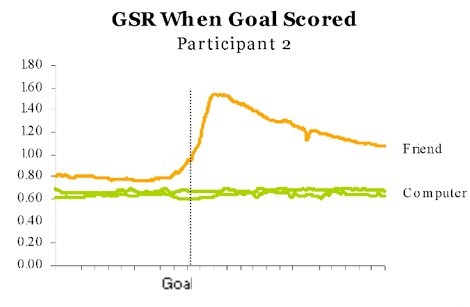 This graph (ref: Mandryk, et al. 2006) shows the marked difference between scoring a goal against the computer (boring) versus scoring a goal against a friend (kick-ass exciting). This is probably quite useful when play testing users without think-aloud protocol, and aggregating the data for multiple participants. 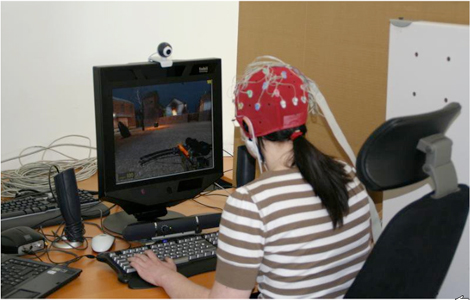 An extensive set of kit is used in this picture: an eye tracker, screen recording software, facial expression recording via webcam, plus EEG/EMG and GSR devices (Ref: Nacke & Lindley, 2008). I don’t envy their research analysts who must have to crunch vast reams of data for each participant.

Example output from an EEG session 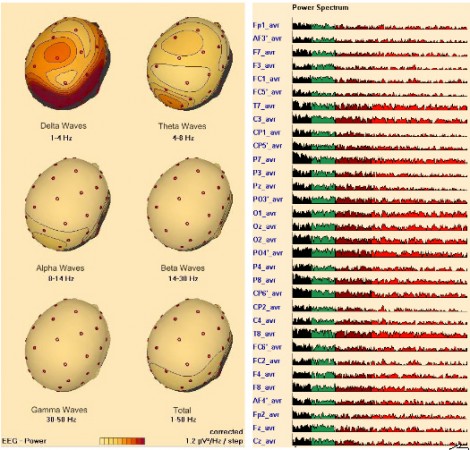 Crazy stuff isn’t it. The real challenge with EEG analysis is to take this data output and translate it into actionable findings that can be used to optimise the game design.

The jury is still out regarding biometrics – some gameplay researchers doubt the practical value, suggesting such tools have a big wow factor but can be expensive and time consuming to use. Although biometrics may not yet be proven as a core tool in gameplay research, it’s great that people are working on it. This is how new research methods are born.

Special thanks to Lennart Nacke et al for use of their images in this article. If you fancy reading more on the academic side of things, check out Lennart Nacke’s and Regan Mandryk’s research publications.